A Century of Giving

The summer of 1922 was a bad time for idealism. The horrors of World War I were still fresh in the nation’s memory; American literature, such as T.S. Eliot’s Wasteland and Sinclair Lewis’s Babbit, reflected cynicism and a bleak view of the future. As journalist William Allen White wrote, the American people were “tired of issues, sick at heart of ideals, and weary of being noble.”

But this pessimistic view of the future was not shared in Fort Wayne. Reflecting hope for the future and sharing a common vision, on June 2, 1922, a group of community leaders formed the Fort Wayne Foundation, “a perpetual community trust which should grow into very large proportions in the course of time.” Andrew Carnegie is quoted as saying, “Riches are essentially a trust which came from the community and which should return to benefit the source from whence they came.” The creators of the Community Foundation had a vision for its growth, and stated that the management of the Community Foundation “is beyond the reach of any class, creed, clique or party, and will absolutely reflect and express the public sentiment of the community as it may change from time to time in the years to come.”

Read the rest of the story....

The Fort Wayne Foundation was governed by five trustees, including Arthur Hall, head of the Lincoln Life Insurance Company. The founding banks read like pages from Fort Wayne’s history: Bowser Loan and Trust, Dime Savings and Trust Company, Lincoln National Bank, and Peoples Trust and Savings Company, among others. Their vision was to create a perpetual pool of assets, the income of which would be used for the benefit of the community. “Never in the history of modern times,” their organizing documents read, “has the welfare of mankind more urgently demanded the encouragement and promotion of gifts for educational, charitable, or benevolent uses.”

The Fort Wayne Foundation was successful in generating several bequests.

William Mossman gave the first gift of $5,000. Mossman’s sister, Ethel, had married George Jacobs, who invented a process for coating electrical wire. Jacobs created the Dudlo Manufacturing Company, which manufactured the new coated wire. Mossman offered to invest in Dudlo Manufacturing – if Jacobs would move the company from Massachusetts to Fort Wayne. Dudlo eventually led to the creation of Rea Magnet Wire, Phelps Dodge Wire and Essex Wire. This led to Fort Wayne becoming the “wire die capital of the world”

In 1927, civic leader Rose Fox Niezer was killed in a traffic accident. In his grief her widowed husband, Charles Niezer, gave $5,000 to the Fort Wayne Foundation.

In the 1930s, its largest gift to date, $7,500, came from the estate of Robert M. Feustel. Feustel had been the chief executive officer of the local electric company.

But the Great Depression was not kind to Allen County. All income from the trust was used to relieve the suffering of the poor, and economic conditions were not conducive to large charitable bequests. As the 1940s began and war clouds gathered over Europe, interest in the Community Foundation waned. On Tuesday, December 2, 1941, five days before the attack on Pearl Harbor, the trustees of the foundation gathered in Arthur Hall’s office at the Lincoln Life Insurance Building and passed a resolution that said, in part:

But the idea of creating a permanent endowment for the benefit of Allen County would not die. Fifteen years later, again in the offices of the president of Lincoln Life, who was now Walter Menge, the Fort Wayne Foundation was reborn. The name was different, the new foundation was termed The United Charitable Foundation of Allen County, and this foundation was a corporation, not a trust. The members of the board of directors included names that are still familiar: Haywood Davis, Harold McMillen, Walter Walb, A.W. Kettler, Allen C. Steere, and others. On August 1, 1956, the United Charitable Foundation of Allen County was formed with $85 received in gifts on that day.

As an interesting footnote to this story, it turns out that the trustees of our original foundation never actually took action on the above 1941 resolution from the Distributions Committee. Why not? We will never know for certain, but one notable fact is the date of that resolution: Tuesday, December 2, 1941, which was just five days before the attack on Pearl Harbor. Those trustees likely had more important things on their mind in the days that followed than the dissolution of the foundation.

In addition, one of the trustee banks continued to pay dues to the national community foundation association, even after 1941. Not only that, but that trustee still held a $7,500 estate bequest that had been received by the 1922 foundation, which they gave to the 1956 foundation. Years later, the original foundation was formally dissolved.

The United Charitable Foundation was staffed entirely by volunteers, and it grew slowly. Earl Ward was appointed the executive director in 1965, and he was succeeded in 1973 by Paul Clarke. Clarke was one of the founders of North American Van Lines, and, after he sold that company to Pepsico, he devoted his full efforts to growing the Foundation.

Under Clarke’s leadership, asset growth began in earnest. Assets exceeded $1 million for the first time in 1980; by 1983, assets topped $2 million.

Clarke left the position of Executive Director in 1984, and was replaced by Barbara Burt. Under Burt’s leadership assets continued to grow, including a major milestone in the early 1990s when Paul Clarke and his wife, Helen, made a series of gifts when in total exceeded $20 million. By the time Barbara Burt left the Community Foundation to head the Foellinger Foundation in 1995, assets exceeded $30 million.

David Bennett became Executive Director in 1995. Around this time, Lilly Endowment in Indianapolis began a program of significant support for community foundations in the state. The program, known as the Giving Indiana Funds for Tomorrow (GIFT) Program, provided outright grants, matching funds, and operational support to help community foundations grow. The GIFT Program, which in 2001 reached it’s 20-year milestone, has provided important support to the Community Foundation the last two decades.

Sometimes fortuitous opportunities come along which benefit many. In 2007, Lilly Endowment asked the Community Foundation to identify the community’s most compelling economic need. A group of community leaders began a year-long process of exploring and visioning for the community’s future. The leaders discovered that our community is strong in the aerospace and defense industry, as well as advanced manufacturing, and we have the opportunity to grow jobs in those sectors. But we need people with the right skills to fill those jobs in areas such as STEM-related careers (Science – Technology – Engineering – Math). After crafting a proposal to Lilly Endowment, they awarded Community Partnerships Inc., a supporting organization of the Community Foundation, a $20 million grant to develop a program (Talent Initiative) to address the education and training needs in northeast Indiana. Today, our partners – Northeast Indiana Fund, K-12 school systems, universities, and industry – continue to support the Talent Initiative.

Over the past century, the Community Foundation has provided significant support to important local projects. One example is support for riverfront development in downtown Fort Wayne, which has finally come to fruition thanks to support from many benefactors – including the Community Foundation. While this project is an exciting addition to the core of our city, the development is part of a dream that stretches back nearly to the early days of the Foundation.

Many of our citizens wish to leave after them some enduring contribution to the social welfare of the community in which they have lived and prospered. Some have hesitated, for the reason that they have felt they could give so little that not much good would result. Gifts can be made to the foundation with the assurance that with many other like gifts the total will be very substantial. Thus every person, no matter how small his or her means, can have the pleasure of doing a part toward the building up of a large fund.

Community Foundation’s centennial cause for CTN, and us all, to offer thanks

David Bennett’s Letter to the Editor

Letter to the Editor: The Legacy Christine Leaves

The Foundation of a Brighter Tomorrow

The Legacy of Paul Clarke 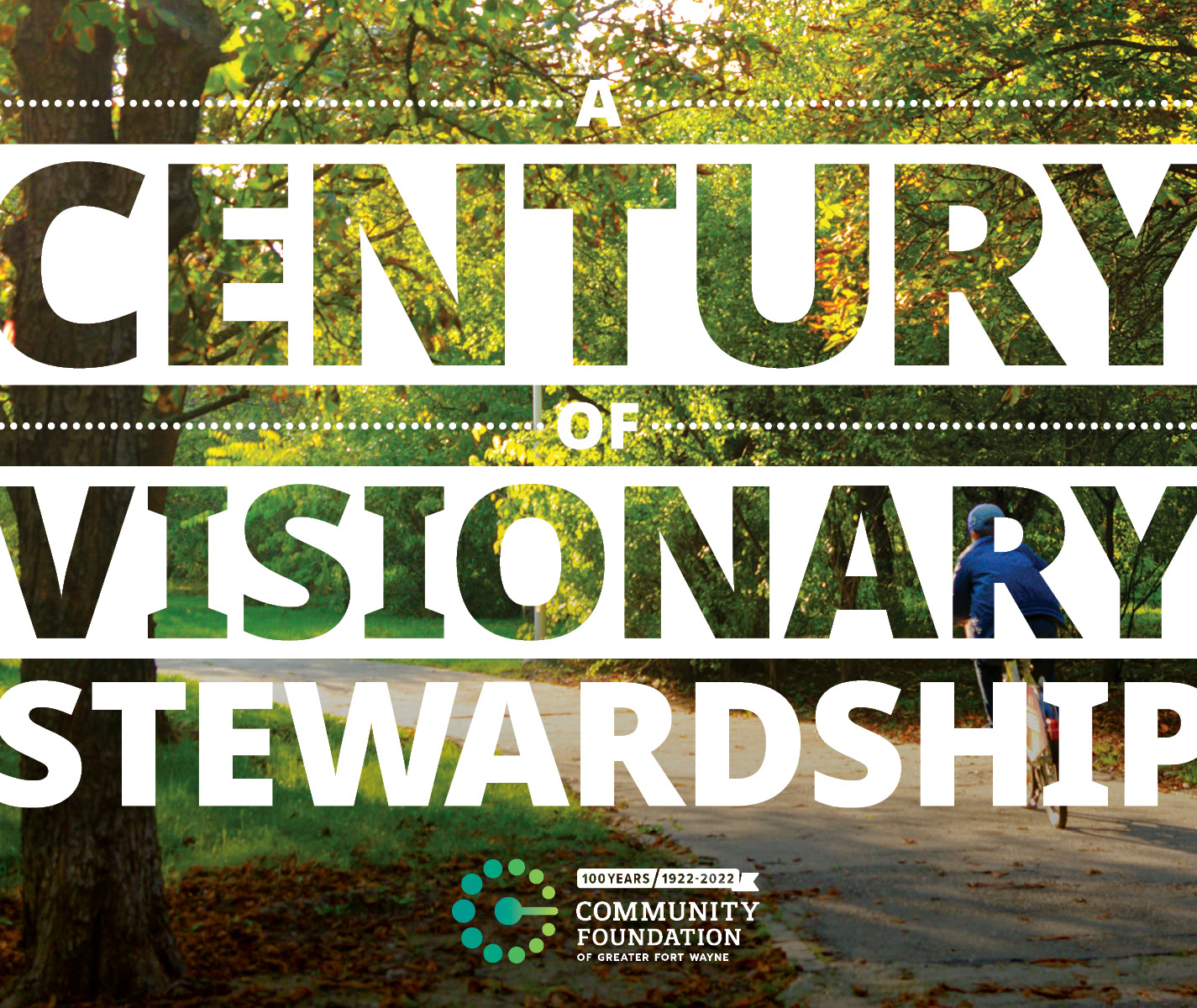